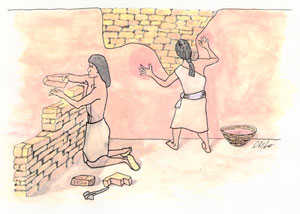 “I have nothing more to say to you. Words fail me,” she said and stomped off ending the argument. Silence reigned. Not the warm glowing silence that envelopes two people who are so comfortable with each other that they can live companionably without filling every nook and cranny with their voice. No, this was a cold dark frosty silence. For a while it creaked with the tension and bitterness of the unspoken verbal duel and then with time lapsed into more or less a total disconnect between the two people concerned.

Yes, I do believe silence comes in different forms, one of which is our inability to reach out and connect with another human being. Is it a failure of words or is it simply borne out of some fear deep within?

“Why don’t you just tell him what you feel, rather than keeping quiet about it?” I asked a friend, who was living through a strained relationship in stoic silence. “Things will only get worse then. Atleast this prevents ugliness.” I asked her why she assumed that things would get ugly if she spoke her mind, just what she felt. “Oh well, we never can stick to just sharing our feelings, we end up blaming each other and it leads to terrible fights. I am so tired of these fights that I prefer it this way. It atleast has the pretence of being peaceful. Stifling is better than aggression. Anyway I have no choice. The alternative is much more terrifying. ”

This silence results from our fear. Fear of the consequences we imagine will arise on expressing what we really think and feel. Most often it is the fear of losing something, be it an argument or a person we love. Or it could even be the fear of discovery – the discovery that we are not what we, till now, had projected/believed ourselves to be. But at the core, it is often our fear of being rejected, ridiculed, a loss of power and/or a fear of failure.

In Bergman’s ‘Silence’ we are treated to this desperate need to communicate and the underlying fear. The young boy Johan entertains his aunt Ester with a puppet who speaks a funny tongue. When questioned why he speaks funny, Johan replies, “Because he is afraid.” This theme of fear is continued in ‘Persona’, where Elizabeth, an actress is suddenly left in a speechless limbo as language fails her altogether.

A friend and I never seemed to agree on our views on Freud. We argued for a few days and then one day I said, “let Freud be a taboo topic between us.” And so it was. Then one day, while talking about something else, he said, “just like we do not discuss Freud, we will not discuss this.” I realized something very important that day. This is how walls are built. Soon there will be many issues ‘not to be discussed’. We will not be able to share freely for there will be censor at work, trying to skirt politely around various issues. Conversations will be more like trying to walk safely through a minefield, dreading that at any moment we may step on and trigger a mine of argument. And who knows, finally, if we get tired of being on guard all the time, the wall will become insurmountable? Will there be silence then?

When we cannot communicate freely, when we do not find the right words to reach out and touch one another, is it the beginning of the end? Does fear get to win in the end? I would like to believe otherwise; that we have the grace to live life with courage. For after all, as someone rightly said, courage is not the absence of fear. It is plodding through our fears with the realization that something else is more important.

The next time we chat, I will tell my friend that we can discuss Freud as well - and will not be afraid of a good argument.

hmm u seem to be quite a bergman fan!!! have u seen The Seventh Seal - i found it an awesome movie...the allegory was stunning....truly brilliant, the movie was..esp that final dance of death...

Yep Nikhil I am a Bergman fan... I find his movies fascinating!
And yes I have seen the 7th Seal :-)...have you seen any others?